This morning I had to get up and out of the house much earlier than normal, and while driving down our town's main street I noticed that the heavy rains and humid weather and whatever other weather had caused a bumper crop of huge white mushrooms to sprout, especially on the median knolls where they were undisturbed by rampaging kids and dogs and homeowners. I'm sure this must have happened other years, but I've never seen such big ones here, or so many at a time stretching all down the street. At first I actually thought they were those fake white resin 'shrooms that people buy from catalogs to put out on their lawns under a tree, and that our burg had engaged in some "beautification" as is their wont (we're always getting a new sign here and a new clock tower there with the county monies), but as I drove past patch after patch I realized they had to be fo' realz because no way would the city have money to buy THAT many big fake shrooms.

So, instead of going home and taking a nap like I planned, I wrangled my crappy camera and its ded batteries down to the village green and crawled around in the grass for awhile, getting all itchy and sweaty and bit by chiggers and generally making an arse of myself in front of ppl driving by to church and mowing their lawns and what not, as I tried to take halfway decent fungi picx. I need a better camera One Of These Days, but I still liked some of the shots.

Someone pointed out that this big group was arranged in a fairy ring. Hmmm, mighty suburban fairies :P 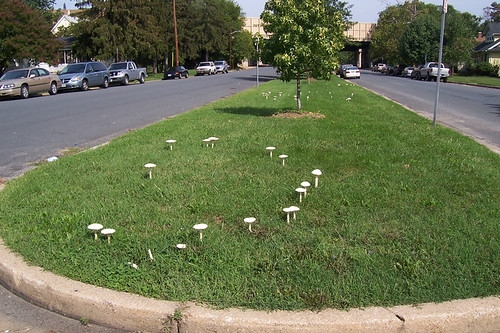 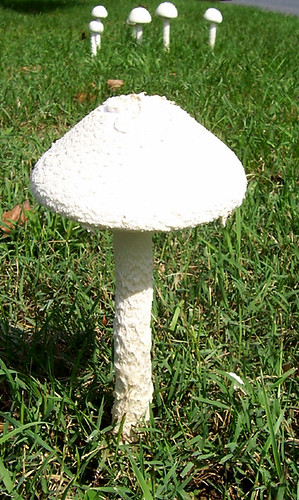 Squirrel's, or maybe chipmunk's, eye view of the world... 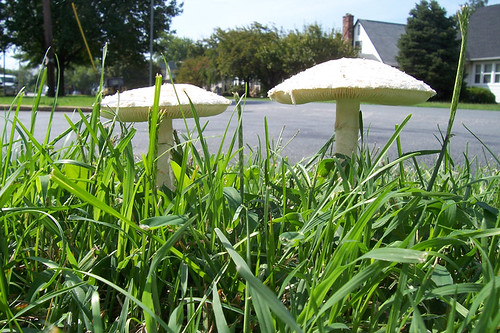 No 'shrooms were harmed in the taking of these pictures. The top fell off this one all by itself before I showed up. 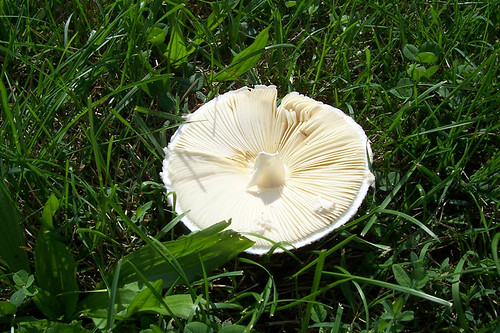